After I learned of the murder of Rayshard Brooks, 1.5 miles away from my home where I launched Women Engaged (WE) with my dear friend and cofounder Margaret Kargbo, it felt deeply personal.  His murder was captured on video in the parking lot of Wendy’s, one of a few late night eateries, in this historically working class Black Southwest Atlanta community just a half mile from Women Engaged’s new office, so this hit close to home for us.  As a matter of fact, I fondly remember, while pregnant in 2018 with my daughter, frequenting this Wendy’s to satisfy late night cravings.  Rayshard Brooks, like all of us in the neighborhood, went there knowing that the drive thru stays open late, that you will receive friendly service, and you can eat in your car in a well-lit parking lot. The Wendy’s was not only a place for quick food options but a place that community members could access by foot, teenagers in the area could meet, and many can catch public transit right outside its doors. Often our canvass team would utilize this location as a rendezvous spot during shifts and a place to take breaks from the weather.  Yet, he was not afforded that opportunity.  Instead of getting the help the Wendy’s employee felt he needed, he was instead met with death by the police officer responding to the call.  This served as a reminder to me, as a Black person, that I am not safe; we are not safe in an anti-Black racist, white heteropatriarchal society. 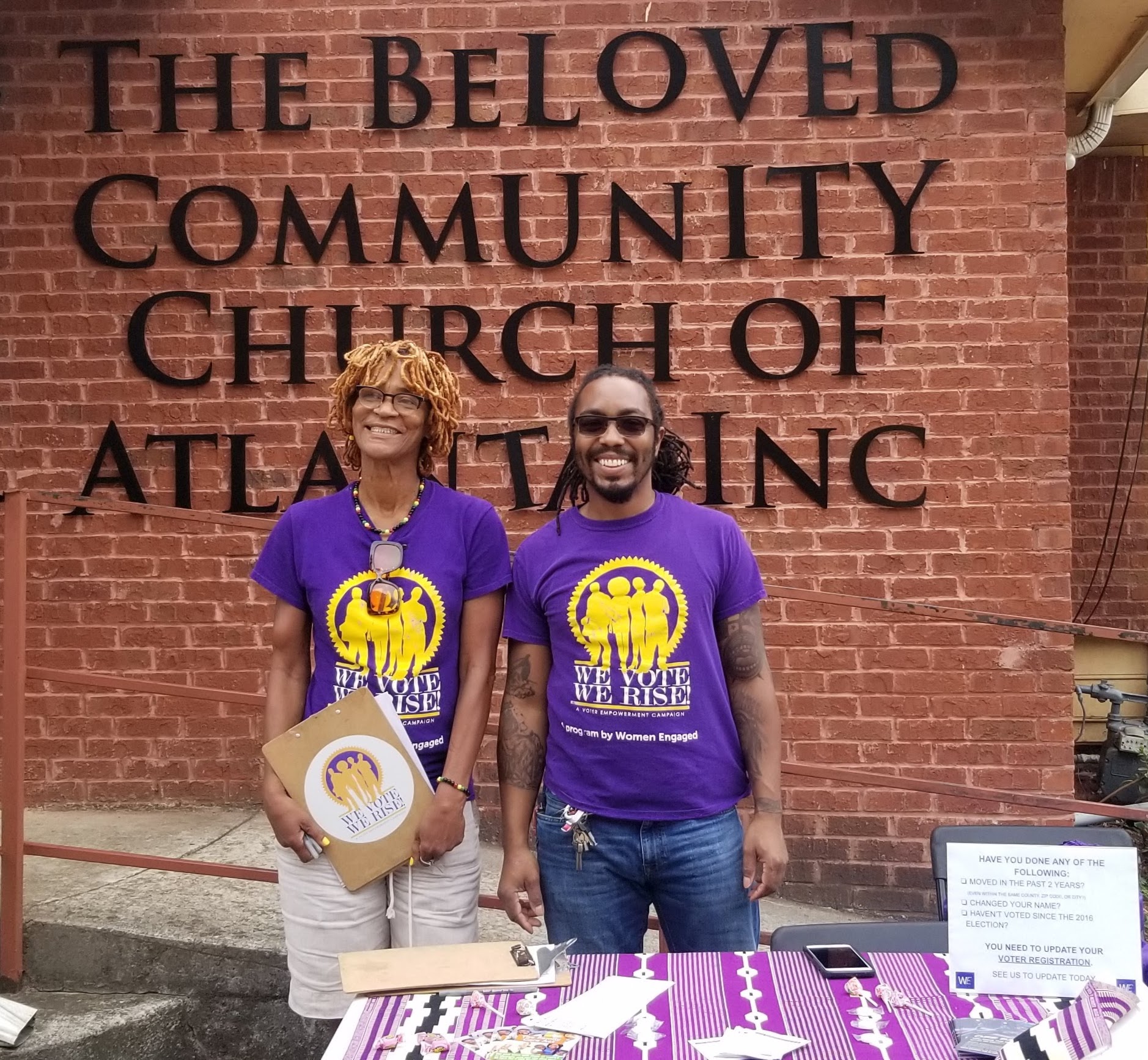 Our signature WE Vote. WE Rise! program services as a community determined comprehensive response to building collective voting power using a grassroots canvassing strategy to increase voter participation based on the issues key to community members living in Capitol View Manor, Capitol View, Adair Park, and Pittsburgh just steps from the site of the Atlanta uprising for Black lives.  These communities also reflect the rising American electorate, as 85% of residents are Black between ages 25-44, with an average income of $28,000.   Therefore, we make it a point to not only work in these communities, but to also hire people directly from these neighborhoods. We value the experience of neighbors organizing neighbors and for our other team members to get first hand knowledge of people who stay within the communities we serve.  It is no coincidence to my team that we are witnessing our community become the newest site of the current uprising and resistance, as it directly reflects what we have learned over the years, engaging residents. The top 3 concerns we have heard are over-policing, accessing healthcare, and gentrification.  So we make sure we are working with other community partners like the Beloved Community Church, led by Dr. F. Keith Slaughter, to engage residents by providing voter education, developing a voting plan, assist voter registration, and share job opportunities at their weekly community food pantry.

In the culmination of all of this, I am reminded of bell hooks’ thoughts on how our love of Black people was always at the center of the Black liberation struggle. In her trilogy series on love, bell hooks takes note of the misconceptions that freedom must centralize power over love.  Instead, she offers that love and power work in tandem with self-determination and love is central to Black freedom.  This is what I see happening today as the movement for Black lives centers on love of self, a determination to be fully recognized and respected, allowing our entire community to thrive.  Self love and self-determination are the cornerstone of reproductive justice.  WE’s intersectional framework links the current uprising to our community engagement work.  As a Black women-founded, and Black-led organization, our roots are steeped in love and power-building and connects us to the rich civil rights legacy that transformed the world and makes Atlanta, GA, so special.   We invite you to support what we do, in the communities that we hold near and dear.

With Love and Power, 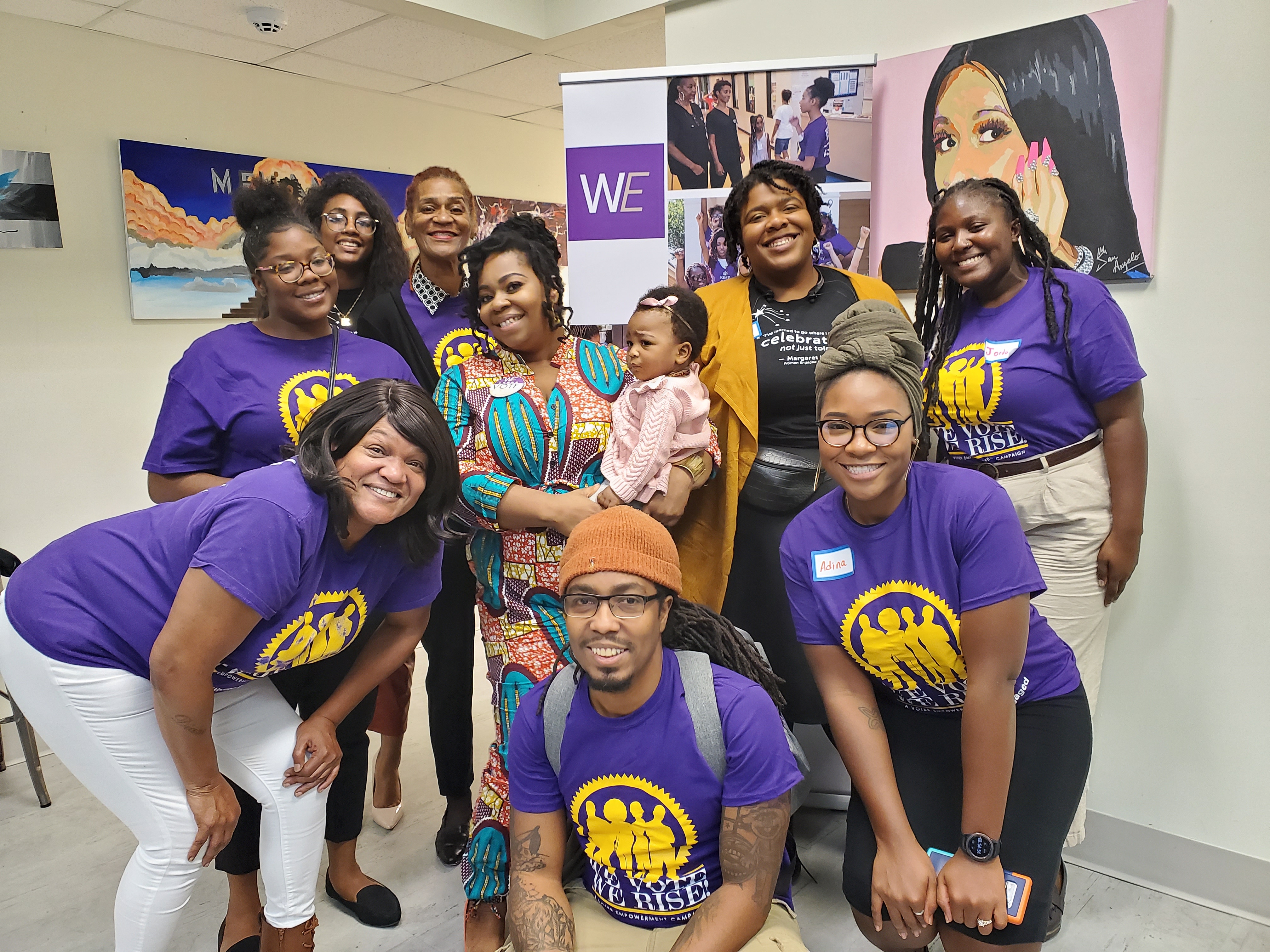 Contribute to the mission | Women Engaged | WE Vote. WE Rise! | #WEVoteWERise

June has ushered in a number of horrific and surprising events. In the midst of the global pandemic, Georgia held its primary election, we all celebrated Pride with a SCOTUS decision that protects LGBTQ+ worker’s rights, we saw national recognition of Juneteenth, and  the continuation of monumental uprisings for racial justice to defund the police and end police brutality.  Anti-Black racist violence is circulating heavily on social media, making us further aware of surges of white domestic terorrism by agents of the State. 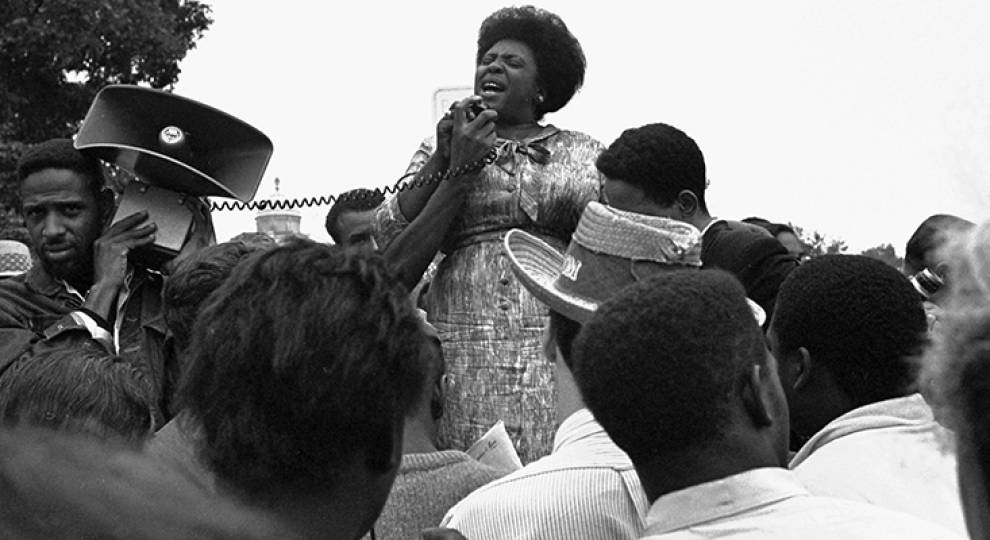 Fannie Lou Hamer spoke these words 56 years ago at the Democratic National Convention in 1964. Hamer faced issues of police brutality, voter suppression, racism, sexism, and accessing reproductive healthcare. In her strategy to hold the electoral process accountable, she co- founded the Mississippi Freedom Democratic Party, which worked to center the comprehensive experiences facing Black people, in particular Black women and children. As a Black woman, we recognized that she is often overlooked as a leader, in the history of the Black Liberation struggle.

Black womxn, femme, queer and  trans people continue to be marginalized, and endure our share of violence and death at the hands of police, agents of a system designed for our destruction. In mid-June,  Oluwatoyin Salau, a young Black queer Black Lives Matter activist, lost her life after being attacked by a man who had sexually assaulted her days prior. The level of violence that is facing Black people, especially Black trans, women, and femmes can no longer be tolerated, nor dismissed as we continue to lead in the liberation struggle.

We, as the Program Team of Women Engaged, are inspired by the life and work of Hamer and mourn the loss of Toyin and countless others. In this major election year, human rights and environmental justice are at stake, which can create lasting damage to our movements overall, we believe it is critical to learn from the fruitful legacy Hamer has left us now.

Learn How to stay safe while protesting click here

After the infamous 2018 general election, it is appalling that we have experienced another traumatic election this past month for the Georgia Primary. Our team conducted election protection at precincts in East Point and saw voters experience 3-6 hour wait times, with poll workers who were just trained the night before. We saw frustrated voters leave because they had to go back to work or to their families. In the state of Georgia, employers are required to only give two hours of paid time to vote. Yet, it seems in every election, our community has to wait hours to participate. We need to not only hold the Secretary of State accountable, but make sure that our county board of elections and superintendents listen to our concerns and advocate in the best interests of our communities, to enact fair and accessible elections. There is a need to appoint representatives from our community to these positions. If you reside in Georgia and  are interested in learning more about the process in your county, send an email to our program team!

PASSAGE OF  HB1114: MEDICAID EXPANSION FOR POSTPARTUM PEOPLE UP TO SIX MONTHS

The Georgia legislature reconvened June 15th after an extended recess due to COVID-19. We have been following HB1114, which would expand coverage for Medicaid recipients postpartum up to six months. We are excited to see that the legislature has passed the bill and allocated $20 million to implement the program. This extends pre-existing coverage four additional months than originally allocated. Last year, Georgia’s infamous HB481 abortion ban brought attention to maternal health disparities for Black women in the state, as Georgia led the nation in maternal mortality, up to one year postpartum. This is a small victory for Black women in Georgia.  Importantly, Rep. Renitta Shannon had initially introduced a bill that would expand coverage up to 12 months postpartum, a step in the right direction for Black mothers who are four times more likely to die than their white counterparts.  Still, there’s more work to be done.

Since 2014, Women Engaged has worked diligently to advocate for Medicaid expansion through the Affordable Care Act. We uphold the belief that reproductive justice is at the helm of every social justice issue. While we realize this is only a small step, we celebrate the bill's success and will continue to work with coalition and community partners to increase access to high-quality and culturally competent healthcare.

In conclusion, while these SCOTUS victories are important, as voters we need to recognize the role that the President has in nominating Justices. We have the power to determine the President and the people s/he appoints. The Senate then confirms the President’s nomination. In Georgia,  we also have the power to elect two new U.S. Senators this year, the first time in many years. We must elect Senators who will act in our best interest.

This year we have adapted to difficult times. We have continued our get-out-the-vote and get-out-the-count efforts from late February through June 9. We’ve had over 5,000 conversations with Black voters in metro Atlanta. We add a question to our canvass script, to identify those impacted by COVID-19. We were able to follow up with over 200 local residents, connecting them to vital services to meet their immediate needs. And we have many more exciting things planned for this summer as we ramp up for the 2020 election!

Whether you are called to protest, or stay inside due to COVID-19, there are things we all can do.  Below are a few things you can do to ensure that all Black lives matter through reproductive justice and civic engagement.

Together, with you, we will continue to fight for our lives and communities. We are ready to continue to build power as we make our way through November and onward.

In Fury, Love, and Power, 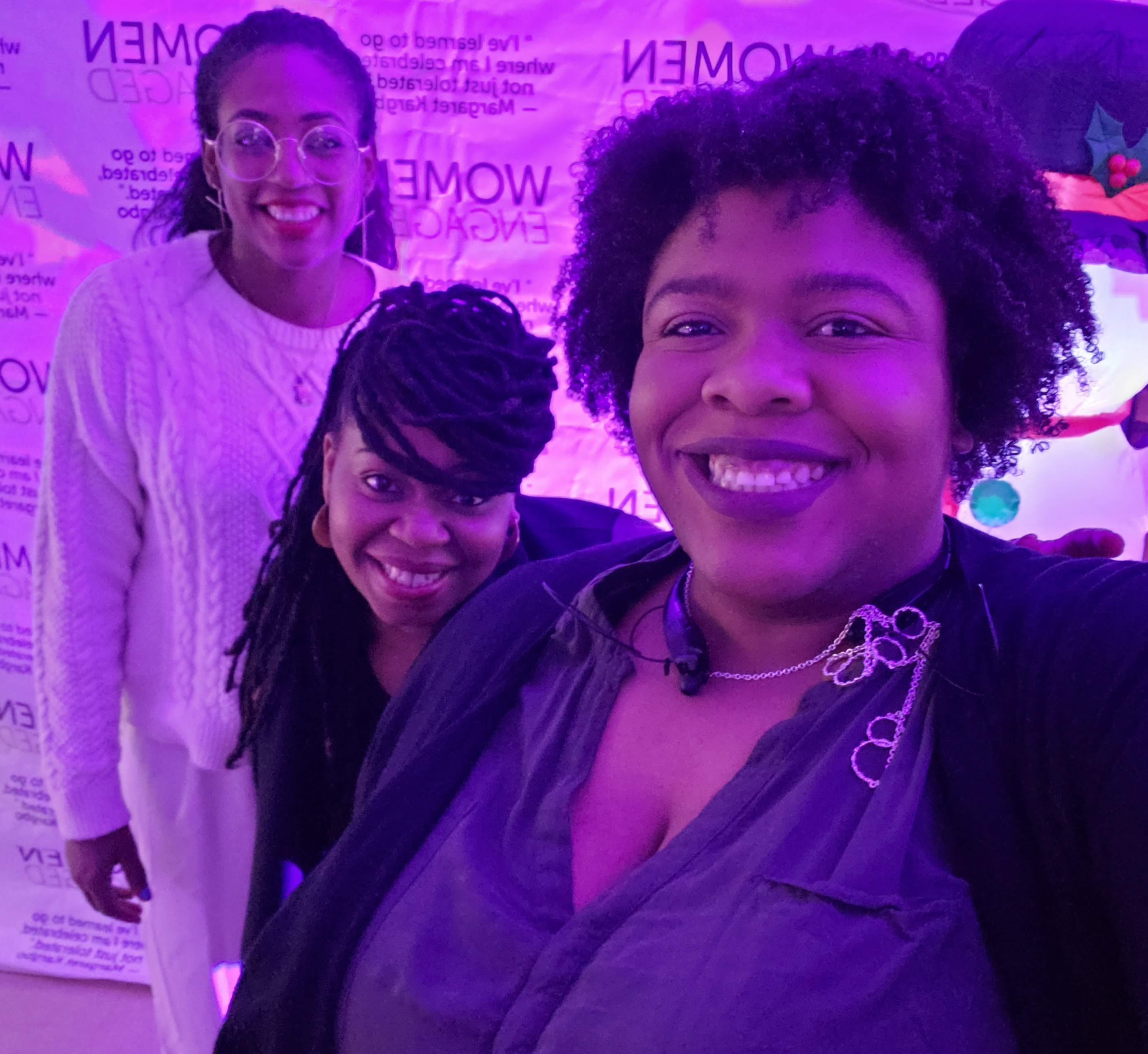 Contribute to the mission | Women Engaged | WE Vote. WE Rise! | #WEVoteWERise

or
Please check your e-mail for a link to activate your account.

“In the past few years, America has assaulted women’s right to choose, and today, Congress has chosen to restrict comprehensive protection for women’s reproductive rights. We are disappointed the Women’s Health Protection Act didn’t pass in the Senate today, leaving many states and by extension, women across the country, vulnerable... READ MORE »

ATLANTA, GA - The week of December 6th, Women Engaged (WE) will celebrate its seven-year anniversary with a week-long virtual and in-person experience for donors, members, activists, partners, and community members. This seven-year celebration is being held to honor the transformative work WE have done within voter engagement, leadership development,... READ MORE »
READ ALL THE NEWS »
Donate
Subscribe with RSS